The 2017 growing season is coming to an end with rather nice “normal” weather for the Willamette Valley. As I write this letter we started our first picking of the season today, September 28, 2017; by comparison 2015 and 2016 we were mostly picked by now. The entire season was on what I call the “average track” for weather and grapevine physiology. The wet spring gave us plenty of moisture for the dry growing season; with the exception of just a couple of 100+ degree days we had perfect weather. Most days this summer were in the mid-80’s; cooling down to the low 60’s at night. This year bud break happened on April 20th, bloom June 20th and now harvest will be pretty much done by the first week of October.

This growing season gave us very nice uniform fruit set with smaller berries and a low amount of juice; which should give us nice concentration for 2017. The “wet” trend of the 7’s years (link to 1997 and 2007) gave us light Pinot’s, but they were very tasty. We will see what comes from 2017 soon; but I expect well rounded wines with good acidity and deep color. 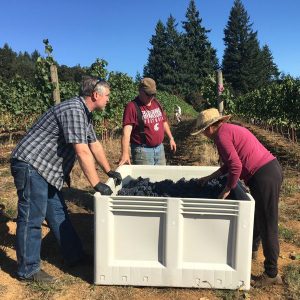