Spring in the Vineyard: Q & A with winemaker Matt Compton

What have you been doing in the vineyards over the last 3 months?
The last three months in the vineyards have been all about pruning. Pruning is a three-step process which is all completed by hand labor. First step is making the big cuts with a pair of loppers, second step is pulling the brush out of the canopy and placing it in the tractor aisle to be flailed by a mower, and the third step is deciding which fruiting canes to leave and tying them to the wire.

What are you currently doing?
Currently we are finishing up with the pruning and waiting for the rain to give us a break so a tractor can get into the field. Once the weather is dry then flailing of the brush will happen along with some weed control. Other jobs are needing to fix the trellis of the vines, and replace missing vines along with fixing deer fence.

How has the winter weather affected the vines?
The weather has not been much of an issue for the vines this year. The key is coming up with spring frost potential. The good news is, with a cooler winter we have been having then in the last three years’, bud break should be closer to “average” in mid to later April. 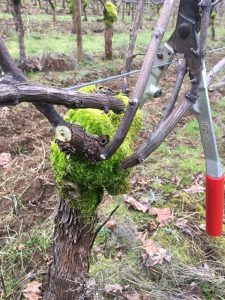